Welcome to 37 North at Fort Monroe! The newest resort location on The Chesapeake Bay is a destination unto itself and the catalyst for/of new transformation coming to Historic Fort Monroe. The vision for 37 North is that of brothers Randy and Brian Pack, of Pack Brothers Hospitality. The two brothers have grown up in the hospitality industry working in their family business at Smithfield Station in Smithfield, Virginia, and The Surry Seafood Company in Surry, VA. They will bring their vision, ideas, and lessons learned over the last 35 years to Fort Monroe to create one of the most interesting and premier destinations on The Chesapeake Bay and Eastern Seaboard.

The reimagining of the vision for Fort Monroe began shortly after the 2005 Base Realignment and Closure (BRAC) process brought on the Army’s departure from the fort. When the Army’s last office closed in 2011, the Fort Monroe Authority was formed by the State of Virginia and tasked with repurposing Fort Monroe and returning life to the once-bustling island. 37 North plans to bring The Hotel at 37 North, a 90-room boutique hotel, and a 500-seat restaurant with expansive outdoor seating areas and waterfront views of the Chesapeake Bay. A newly remodeled marina will update and replace the former Old Point Comfort Marina with 300 slips, and there will also be an addition of a 250-person conference center and wedding venue – all of this located on one of the country’s most historic forts.

The Hotel at 37 North

This gorgeous 90-room boutique hotel, will be built entirely over the water and offer private balconies with waterfront views from every room, forever changing the way you view hotel luxury. The Hotel at 37 North will cater to the most discerning of tastes, in a way that is neither pompous nor overbearing. Our style of hospitality is comfortable and unique to the private hotel industry, as we are not inhibited by the rules of the branded hotels. Our approachable and relaxing rooms and public areas will be decorated in a coastal theme and offer the best amenities including oversized bathrooms, luxurious robes, the best linens, and spacious rooms. Our outdoor promenade will host fire pits and water features where you can unwind for the evening with your significant other or a group of friends. Hotel guests will also have access to one of the area’s few floating pools. In-room dining, evening turndown service, and a morning breakfast basket delivered to your room are just a few of the amenities you will experience when you join us at The Hotel at 37 North.

The Restaurant at 37 North

The Restaurant at 37 North is a 500-seat restaurant at Fort Monroe located on the southwest corner of The Fort, adjacent to The Chamberlin. The restaurant will repurpose the Old Torpedo Storehouse, and the Old Cable Tank Building, and will add a newly constructed building with an extensive 15,000 square foot outdoor deck. Guests can enjoy an exciting menu focused on seafood, steak, and regional favorites. The indoor bar will host over 100 rotating beers on tap blending local and national brews. Seasonally, our outdoor area will feature a lively outdoor bar, delicious dining with scenic views of the Hampton Roads harbor, and a variety of live music. The menu is designed to be one you will enjoy weekly with fresh food that you understand. Private dining facilities are available for your corporate meetings, pharmaceutical dinners, civic groups, or family and friend gatherings and celebrations. Our guests can arrive by boat or land, and we will also have a seaplane available for those who wish to arrive in a little more style.

Formerly an Army Close Air Support Bindery where all the manuals were printed and paged together, the Conference Center at 37 North is completely transformed. The Conference Center will accommodate up to 250 people for any number of special events. Whether it is a wedding, a conference, or a corporate retreat, our staff stands ready to provide both food and drinks to your guests in complete comfort. Located between the hotel and the restaurant, the conference center is situated along the banks of the river and will have a wonderful outdoor area with brick pavers and even a sandy beach leading to the shoreline. This mid-size venue is a perfect location for those who want to enjoy the best of what our region has to offer.

The Marina at 37 North

Formerly the Old Point Comfort Marina, the Marina at 37 North is about to undergo a major facelift. Destined to become a premier marina on the Chesapeake Bay and in all of Hampton Roads, The Marina at 37 North just needs the proper attention and love that has been neglected for so long. 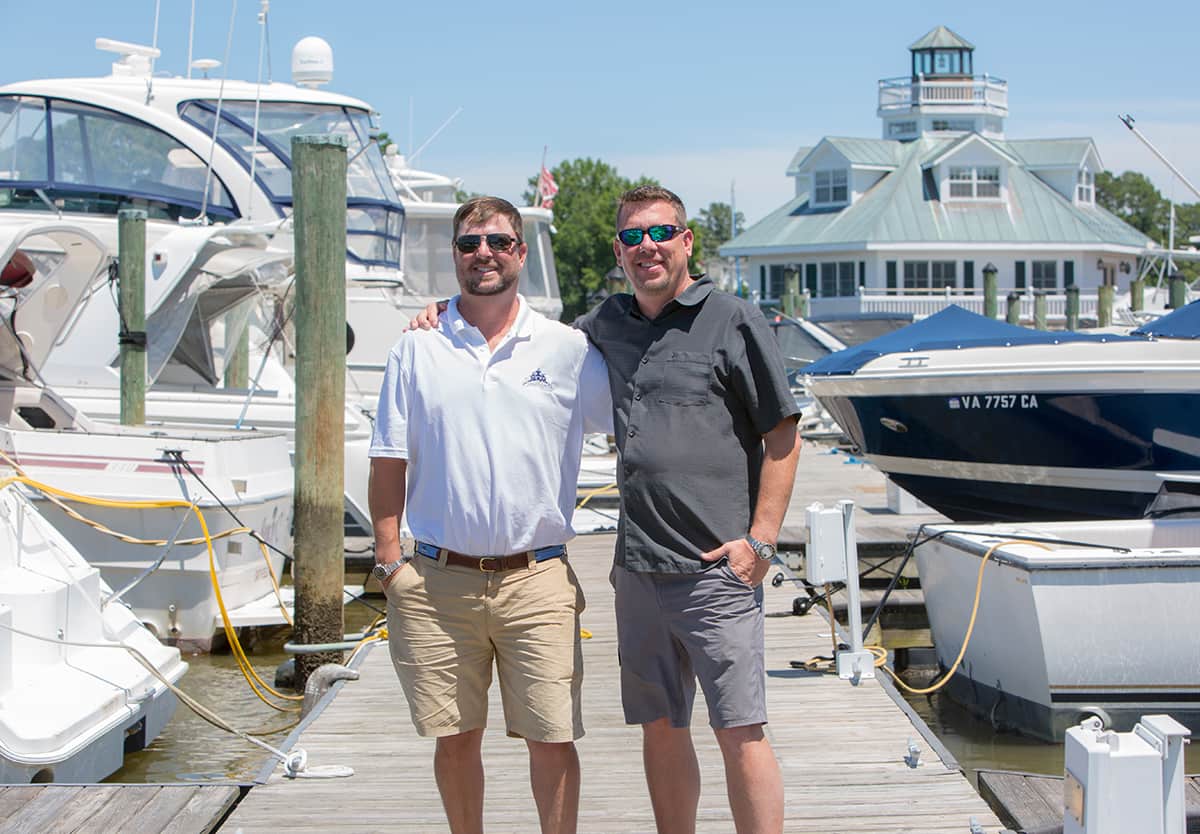 Established in 1986, Smithfield Station was built on the banks of the Pagan River. “The Station,” as it is affectionately known, is the brainchild of CEO Ron Pack. The original building is built on 110 pilings, each 88 feet long, and sits entirely over the water. The main building houses a 175-seat award-winning restaurant and 15 hotel rooms. The original marina at Smithfield Station had 25 boat slips.

In 2001, Randy joined the family business at Smithfield Station full-time, and Brian followed shortly after in 2003. Randy and Brian managed the 2007 project as the hotel and marina at Smithfield Station were expanded to double their original size. Smithfield Station’s new hotel building housed an additional 22 hotel rooms, a centralized check-in facility, a state-of-the-art conference room, and seven retail outlets. They also added 50 additional boat slips to the marina, bringing the property’s total to 100 boat slips and 44 boutique hotel rooms.

In addition to the physical footprint expansion, Randy and Brian have increased sales on the property with the addition of a thriving catering business, the development of a conference facility, and growth in their award‐winning restaurant. While Smithfield Station is the heart and soul of the Pack brothers, their desire to grow and expand their footprint remains. Visit us at smithfieldstation.com

Randy and Brian knew that they wanted to grow beyond their operations at Smithfield Station. The brothers sought different opportunities that would suit their expansion desires in towns from Manteo, North Carolina to Jamestown, Virginia to Charleston, South Carolina, but never found the right project.

In January 2018, the County of Surry, Virginia approached the Pack brothers about the possibility of taking their extensive hospitality experience at Smithfield Station and recreating it at a property in Surry, Virginia called The Surry Seafood Company. The location and the concept were a perfect match and Pack Brothers Hospitality, LLC was born.

Opened in May 2018, the newly renovated Surry Seafood Company restaurant boasts 150 seats with both indoor and outdoor seating capacity, and a beautiful brand new 48-slip marina complete with sanitary pump-outs, composite decking, and fueling facilities. The property was redesigned to incorporate four generously appointed efficiency-style hotel suites on the second floor of the restaurant building.

The Surry Seafood Company offered various challenges to its operation that are consistent with a rural location. However, in short order, the Pack brothers were able to establish a solid management team at Surry Seafood to create a premier establishment that the residents of Surry County are proud of. Today, The Surry Seafood Company is a healthy, vibrant restaurant, hotel, and marina on the banks of Gray’s Creek and its sustained growth continues to exceed expectations.
Visit us at surryseafoodco.com